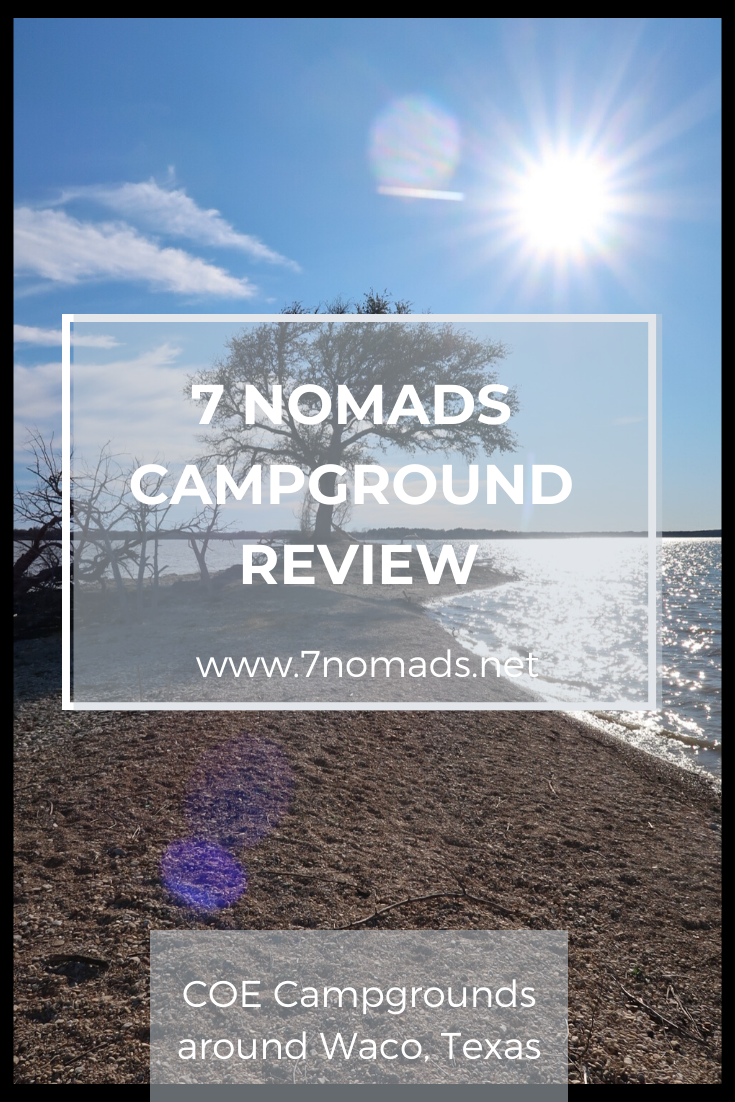 On one of our winter trips to Texas, while visiting in Waco with our pals the Gaines’ (just kidding, I only pretend we are friends, they don’t know us:)) we stumbled across a COE campground. I found the Speegleville COE campground using my handy RV Parky app. I had never heard of COE campgrounds before, but we quickly learned that although the campground was a bit off the beaten path, the extra 10 minutes added to our drive was well worth it for the oasis that we discovered.

Let me tell you why we have fallen in love with the no-frills, all-views, COE Campgrounds! COE is short for Core of Engineers, (technically, the name is United States Army Core of Engineers, but that is a mouthful!) According to their website :

The Army Corps of Engineers is the steward of the lands and waters at Corps water resources projects. It’s Natural Resources Management mission is to manage and conserve those natural resources, consistent with the ecosystem management principles, while providing quality public outdoor recreation experiences to serve the needs of present and future generations. https://corpslakes.erdc.dren.mil/visitors/visitors.cfm

So the COE campgrounds are centered around water recreation in some form. This is reason #1 why I love them. Hello beautiful sunrise/sunset! There is just something peaceful and wonderful about looking out over the water. There have always been wonderful water views whenever we have stayed at one of the COE parks. Fishing, swimming, boating, or just hanging out on the shore and skipping rocks with your kids, there is plenty to do along the water.

Sometimes you roll into an RV park because it is convenient, right along the highway, or maybe you like extra ammenities like cable and free wifi, typically (not always) these convienient types of RV parks are a bit on the crowded side. I don’t know about you, but I don’t particulary love being about 10 feet away from my neighbor’s sewer hose. Reason #2 that I love the COE campgrounds – Very Spacious campsites! These sites are, by far, the largest, most spread out RV sites of any that we have stayed in over the past 4 years.

You would think that with all this bragging on the great features of my favorite campsites, that I would be trying to justify an expensive price tag. But, I don’t have to because these guys are totally affordable. Reason #3 that I love the COE campgrounds – affordability for families! Like 20s-30s, and if you are a senior citizen, you can buy some sort of lifetime pass and get 50% off! We travel as a party of 7, and sometimes campsites like to charge an extra $2-$5 per person over 2 people, per night. The COE campgrounds we have stayed in allow 8-10 people per site! As a disclaimer, I wil mention that these campgrounds do not offer long term stays – two weeks is maximum in one site. This does not bother us as we are on the move often.

Is there anything not to love?

I feel like I should give full disclosure that as a nomadic family, we really keep on the move. Most of that is due to the fact that my husband is preaching in a different church every week. Sometimes we will be able to stay in one spot for a couple weeks at a time if the churches are close together. Because of this constant moving, we are able to see alot of campgrounds and compare them. Typically if a campground is level and not overly expensive, we are good to go.

We do not tend to look for campgrounds that have lots of activities and amenities just because we are not there long enough to enjoy them. Honestly, we rarely go into the shower/bathroom facilities because we have our own. So, if you are looking for a long-term type of stay with plenty of entertainment, this might not satisfy your desires. If you are looking for a peaceful, no frills getaway check out the COE campgrounds!

This post would not be complete without mentioning the little visitor who came by during our stay at the Airport Park COE near Waco. According to another camper, this little guy was rescued by a couple older ladies when they saw his mother die after being hit by a car. They were raising him when they were reported for not having the proper license to care for a wild animal. It was decided to drop off the young deer at this local park because it was known that a group of deer lived here. When dropped off however, the fawn went directly to the campsite to be with people, with whom he had an attachment.

He would come by often and visit with us, he was very friendly. We did get to pet him and he had the most beautiful big eyes. Unfortunately he did not love the jumping and nipping from our puppy Oliver and eventually started to attack him with his hooves.

Thank you for reading along as I talked about the COE campgrounds, so far we have stayed at Speegleville Park and Airport Park both in Waco Texas and Millers Ferry Campground in Camden Alabama.

If you would like to read more about our ministry, Kingdom Pursuit Ministries, go to www.kpministry.org.

I hope you all are enjoying your adventures!

We have enjoyed visiting many campgrounds/rv parks over the past few years all across America. Some have been amazing and some have left us disappointed, but rather than just listing the top ten, I thought it might be a good idea to just talk about what we did and didn’t like at the places we have stayed. As a disclaimer I will add that amenities and public bathrooms are not that important to us, we spend most of our time exploring outside the campground, and our bathroom is in the RV.

So, here goes my first review of a campgroud…

This campground is located on the Mississippi River in West Memphis, Arkansas. I was super excited to stay at this campground because of its name. Tom Sawyer is of course, the well known title character in one of Mark Twain’s classic books. He also is my dad! Yes, my dad is named Tom Sawyer. For as long as I can remember, my dad has been having a wonderful time with introductions:

Dad: “My name is Tom Sawyer” (pause for laughter and amusement) “and this is my wife Lisa, and our daughters, Nadine and Celia.”

So, I was excited to stay at this campground and you might say that this review will be biased because I was already pretty impressed with their name choice.

We were not familiar with the city of West Memphis, and so finding the campground was somewhat difficult. You could blame it on our navigator app, it decided to take us the fastest way possible, which meant driving through back neighborhood streets and industrial areas, we really thought we were lost until we saw the sign pointing us to the campground.  Driving along the road toward the campground was only a little better, their campground sign could use some refurbishing, or else they were just embracing the rustic look, it was a bit swampy and if it had been dark out, we(ok, probably just me) might have felt scared. At last we found the campground and there was a little cabin building where we checked in. A friendly worker helped us out and we noticed they had a small gift shop with Tom Sawyer swag.

The grand Mississippi River could not be missed, and I would say that all the campsites had a pleasant view. It was an overall peaceful setting.The Campground appeared to be well maintained – grass mowed, plenty of trashcans, clean public areas.  There were small cabins in the camping areas with restrooms on one side and a laundry area on the other- small but efficient. Bonus! It was FREE to do the laundry!

The sites were set at an angle and felt spacious to me. We were not camped directly by the river, but it was not crowded so we had a lovely view. I would think that even if it had been full there, it would not have felt crowded. I think they offer wifi, but honestly, we didn’t use it, so I cannot comment on the quality or speed. We have a small antenna from Walmart that attaches to our window, and in areas like this, next to a large city, we pick up a lot of channels. The sites were level and had full hookups.

There was not a playground, but they had something quite unique – treehouses! What?!?! So, as we came in we noticed there were two treehouses. We didn’t know if these were a rented out thing, or just for anyone to explore. I asked the lady at the front office about the treehouses and she said they were remodeling them. She gave us permission to go inside them and asked us to be careful – they were pretty laid back I suppose.

The first one had a ramp that we walked up, and it looked like a giant tin can, but more awesome. The second one was a more traditional tree house, and I guess you could say it rekindled our fear of heights! The treehouse adventure was such a memory maker, and I am curious as to whether they are renting them out now.

We really enjoyed staying here, it was not super cheap, but about midrange for the area. I am sure we will return again someday. It was a good spot to stay and explore the city of Memphis.  And of course, I brought my dad back a t-shirt and some other random stuff with their logo on it.

Thank you for reading this Campground Review by 7Nomads!

If you would like to find out more about our ministry, Kingdom Pursuit Ministries, go to www.kpministry.org